Worlds of Fun in Kansas City 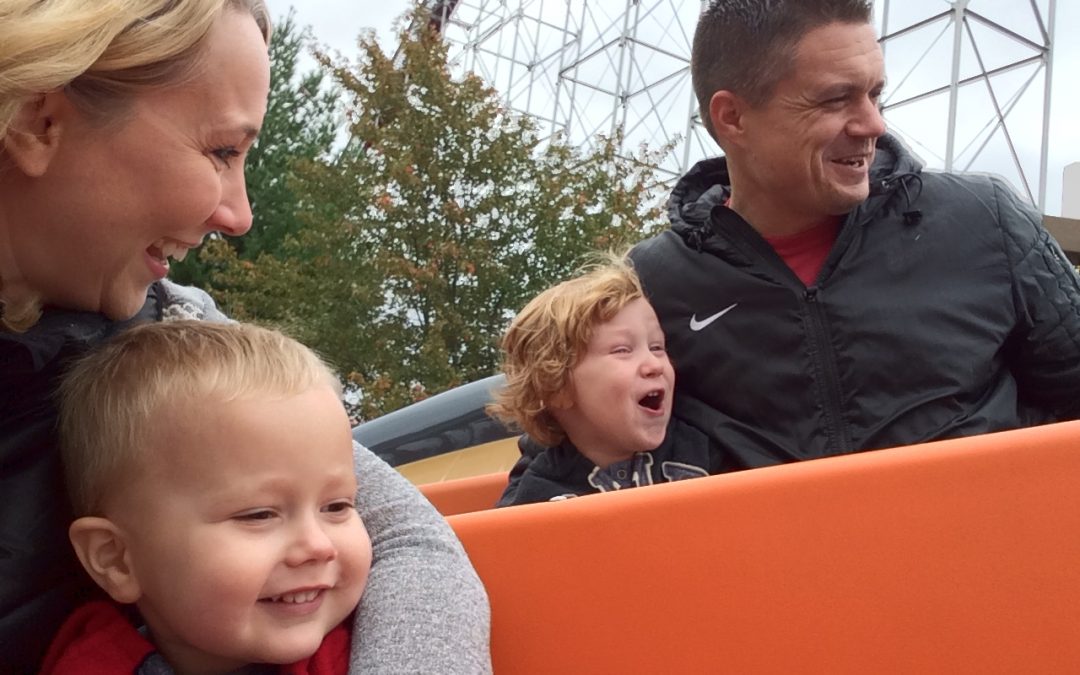 Remember that one place growing up that seemed larger than life and upon reflection as an adult, you can still hear the sounds and smell the smells associated with that place? That is Worlds of Fun for me. I remember when I was in elementary school and my parents bought my siblings and I passes for the first time. It was a huge splurge and we were so excited. I remember the Zambezi Zinger and the Orient Express, two rides that don’t exist today. The first time my husband and I took the boys, they were just 2 and 4 years old.

We headed straight for Planet Snoopy, a darling area with rides for kids based around the Peanuts characters. As we walked, my husband and I couldn’t get over the smell that took us back to our childhoods. That smell of fried food, mostly funnel cakes, and hot tar. Funny how a smell can take you back in time, and in this case to fun family memories that we hope to share with our own children.

Our boys are pretty adventurous and anything they were tall enough for, they would ride. At 5 and 7 now, that still holds true. I take pictures of them every time we go as they back up to the height chart on the first ride we come to, so they can see if there is a new ride they will be tall enough for. Sometimes they stretch up on their tippy toes to see if they can barely squeak by for a new ride.

Planet Snoopy is located toward the back of Worlds of Fun so it takes some walking to get there. I took my double stroller until very recently because it is a lot of walking and would definitely recommend that to keep little ones happy. Most of the rides in Planet Snoopy, the kids were tall for enough as early as ages 2 and 4. They loved every single one. I remember Roen would even put his sweet little chubby hands in the air when he was just 2 years old as Chris or I would hold him tight. They would giggle in delight as they felt the nerves and adrenaline along with the pride of being brave and trying something new.

I loved seeing their little faces burst into laughter as they rode the Road Rally which zips them around an oval track and elicits hysterical laughing as they slide around their seat.

Roen’s favorite has long been the Viking Voyager as it winds through a shallow basin of water to culminate in a climb and plunge into water. You only have to be 36 inches tall if riding with an adult so that was one of the first exciting rides he discovered. When he was littler, he used to ask me to wrap my arms around him and hold him tight down that plunge at the end. Now, he tells me, “I’ve got this mom” and likes to make sure I’m not holding onto him so he can show how brave he is.

The boys also love riding the train that takes you around the whole park and is a great way to see everything Worlds of Fun has to offer.  I always pack our lunch, which we usually enjoy while relaxing and riding the open air train.

We’ve taken it up a few notches this summer as the boys are now tall enough for some of the bigger rides. We love Spinning Dragons. There is always a long wait so we make sure to arrive before the gates open to get through security and be one of the first in the park and on Spinning Dragons. We used to then head toward Planet Snoopy but now they like to go from Spinning Dragons to the Viking Voyager and ride that a few times before continuing to the newer ride Nordic Chaser and continuing around the park.

When Jonathan turned 6, he was tall enough for the wooden roller coasters Prowler and Timberwolf. Those two are not my favorites because they are pretty rough but they are his favorites. It doesn’t seem that there is ever a line for the Timberwolf so we usually ride that several times in a row. He likes to laugh at me when I scream through the ride and he feels so big and brave. On our most recent trip, we road Mamba for the first time. He’s been tall enough for a while now but he wasn’t sure he was ready yet. This time, he was ready and proudly rode with Chris and I both to see if we were more nervous than him (which we probably were).

We have enjoyed the free PreK passes to make those early years of our visits inexpensive. That started a few years ago and that’s the reason we took them at the young ages of 2 and 4. I bought a season pass for myself which gave us free parking and then the boys were both free. Now that they are aging out of the Pre-K free pass, we will probably turn it into a Christmas or birthday gift in order to keep our tradition going.

As part of your ticket or pass into Worlds of Fun, you also have access to Oceans of Fun. We don’t go to OOF as frequently, but on a hot day it’s nice to have the option of combining the two. We arrive before the gates open at Worlds of Fun and enjoy the park for a few hours until it is sweltering and then we head over to Oceans of Fun.

Oceans of Fun has several wonderful areas for little ones and I’ve continued to be surprised how many hours it could hold their attention. The kids love the pirate ship with small slides, ideal for kids up to age 6 or 7. Their favorite water area for several years now has been a floating alligator they can pile onto and slide off into a shallow pool of water. That has brought about countless belly laughs and joyful squeals as the boys play here together and make new little friends. As little ones, they’ve also loved the small slides around this area which are not fast but offer little ones enough excitement to keep them happy.

As my kids have gotten older, they have transitioned to a larger pool area with climb-ons and the next level of slides that are fun but not too terrifying. Oceans of Fun also offers a huge wave pool, lazy river, kayaks, sand volleyball and giant slides that could entertain kids and adults for hours. I imagine we are headed for those much larger areas when Roen is tall enough next summer. For now though, I’m holding onto the little kid fun as long as I can.

Winterfest is new as of a few years ago and it’s wonderful. They have fun shows with surprisingly great performers on stage right when you walk into the park. There is fake snow in different areas and beautiful lights throughout the park. Not all of the rides and attractions are open during this time but I love the combination of some rides and all of the lights that really puts you in the holiday spirit. I’ve been extremely impressed with Winterfest and we’ve added this to our must-do holiday traditions.